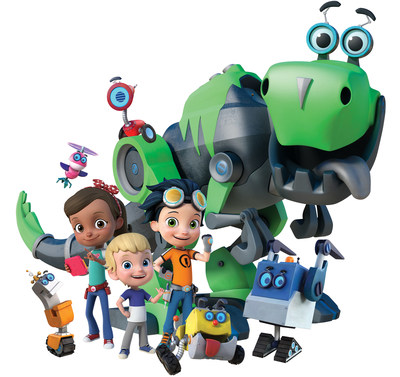 Kids can now build their favorite vehicles and characters like Botasaur within their very own Rivet Lab Playset, while continuing to invent new builds inspired by the ingenuity and innovation seen through Rusty and Ruby. The preschool toy line will debut exclusively at Toys"R"Us stores across North America and online at Toysrus.com and Toysrus.ca on August 1.

"As part of our growth strategy to produce evergreen global entertainment properties such as PAW Patrol and most recently Rusty Rivets, we're thrilled kids can now invent alongside the show's hero characters, Rusty and Ruby." said Ben Gadbois, Spin Master's Global President and COO. "Inspired by elements of the maker culture, the Rusty Rivets toy line combines an easy-click system allowing each of the pieces to work interchangeably, encouraging a sense of discovery and open-ended creative play."

"Since the debut of Spin Master Entertainment's Rusty Rivets on Nickelodeon last summer, we knew we had to have this line for our customers," said Richard Barry, Executive Vice President, Global Chief Merchandising Officer, Toys"R"Us. "Spin Master has a track record of developing innovative toys that bring unique TV characters to life for kids, and we are especially excited that we are the only retailer to sell the Rusty Rivets line."

The Rusty Rivets toy line, which is designed for children age 3 years and up, ranges from $5.99 to $39.99 (MSRP), and includes the following items (among others):

To stay up to date on the latest Rusty Rivets news and product launches, visit rustyrivets.com.

About Spin Master
Spin Master (TSX:TOY; www.spinmaster.com) is a leading global children's entertainment company that creates, designs, manufactures, licenses and markets a diversified portfolio of innovative toys, games, products and entertainment properties. Spin Master is best known for award-winning brands including Zoomer®, Bakugan®, Meccano®, and 2017 Toys of the Year, Hatchimals®, Air Hogs® and PAW Patrol®. Since 2005, Spin Master has received 82 TIA Toy of The Year (TOTY) nominations with 21 wins across a variety of product categories, including 13 TOTY nominations for Innovative Toy of the Year, more than any of its competitors. To date, Spin Master has produced six television series, including 2007 success Bakugan Battle Brawlers and current hit PAW Patrol, which is broadcast in over 160 countries and territories globally. Spin Master employs over 1,500 people globally with offices in Canada, United States, Mexico, France, Italy, United Kingdom, Slovakia, Poland, Germany, Sweden, the Netherlands, China, Hong Kong, Japan, Vietnam and Australia.

About Toys"R"Us
Toys"R"Us, Inc. is the world's leading dedicated toy and baby products retailer, offering a differentiated shopping experience through its family of brands. Merchandise is sold in 879 Toys"R"Us and Babies"R"Us stores in the United States, Puerto Rico and Guam, and in 815 international stores and over 255 licensed stores in 37 countries and jurisdictions. With its strong portfolio of e-commerce sites including Toysrus.com and Babiesrus.com, the company provides shoppers with a broad online selection of distinctive toy and baby products. Toys"R"Us, Inc. is headquartered in Wayne, NJ, and has nearly 65,000 employees worldwide. The company is committed to serving its communities as a caring and reputable neighbor through programs dedicated to keeping kids safe and helping them in times of need. Over the past three decades, the Company has given more than $100 million in product donations to children's charities. Since 1992, the Toys"R"Us Children's Fund, a public charity affiliated with Toys"R"Us, Inc., has also donated more than $130 million in grants.  For more information, visit Toysrusinc.com or follow @ToysRUsNews on Twitter.