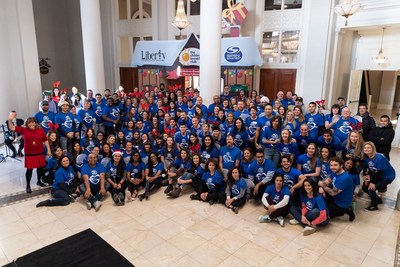 On Tuesday, December 3rd, also known as Giving Tuesday, more than 200 volunteers from Spin Master donned glittering angel wings and helped each child select two toys – one for themselves and another to share with a friend. Children, with their eyes all aglow, were treated to face painting, toy and game play areas, and a dance party, followed by a holiday luncheon hosted by the Liberty Grand.

"The annual Caring & Sharing event is the most wonderful time of the year for Spin Master employees and the children who benefit from this amazing experience," says Anton Rabie, Spin Master Co-Founder and Co-CEO. "We understand the joy a toy can bring and are grateful that we can partner with others to give so many children this magical experience that will live in their memories for years to come. It's a time for us all to gather together and truly celebrate the spirit of the season and the joy of play."

This year, Spin Master has taken this deeply meaningful event to its offices around the world leading up to the holidays. The company has also expanded its holiday toy donation efforts in the Greater Toronto Area by organizing two additional Caring & Sharing events at Firgrove Public School in North York and Roger Neilson Public School in Peterborough. Together, with these events and other local drives, the company donated more than 50,000 toys to children in need in Canada alone.

"Spin Master's generosity and kindness truly reflect what the Children's Breakfast Clubs is all about," stated Rick Gosling, President and Founder of the Children's Breakfast Clubs. "The Caring & Sharing theme allows the children to receive a fabulous gift for themselves and another to share with someone they care about. This spirit of giving is a core value the children will retain throughout their lives."

"Everyone has come together to make this an unforgettable day for all the children involved," said Nick Di Donato, President and CEO of the Liberty Entertainment Group. "The event is a true reflection of partnerships, and we're pleased to host this annual Caring & event benefiting so many kids who benefit from the Children's Breakfast Clubs."

Spin Master's philanthropic efforts include sponsorship of The Children's Breakfast Clubs, The Toronto Fire Fighters Toy Drive and the CTV Toy Mountain Toy Drive. Globally, Spin Master continues to bring inspiration and the opportunity to learn, grow and play to children living in challenging situations through the Spin Master-led global initiative, the Toy Movement. To date, the Toy Movement has completed 14 missions, most bringing toys to over 450,000 children in need, both in Canada and abroad. For more information on how Spin Master is making a difference, please visit www.thetoymovement.org.

The Children's Breakfast Clubs works to ensure that children in some of Toronto's most disadvantaged and marginalized communities start each day well-fed and ready to learn. The Children's Breakfast Clubs works with community partners to provide a balanced, nutritious, and culturally appropriate breakfast program. In addition to offering over 5,000 meals per week in more than 26 community location, the organization also engages community and municipal leaders and agencies, schools, and corporate donors to deliver recreational and educational programming that supports the whole child. The program promotes a sense of purpose and leads to improved health, behavioral, and academic outcomes.